Vic has news to tell that he knows will bring Sade's scoffing and ridicule: Hank Gutstop has been elected as the lodge's Best-looking Man! 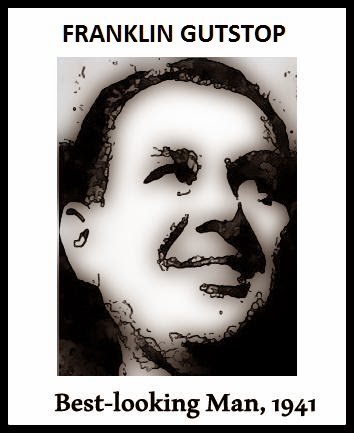 _______________
There's really not much to this script; it's just an excuse to put down the lodge and Gutstop. Sade doesn't think Hank is good-looking at all, and the ritualistic way in which he was chosen (blonde boy pulls his name out of a hat) is just a reminder of just how silly the lodge can be.

+ Rush mentions that he was reading about counterfeiting parachute jumpers in his Third Lieutenant Stanley book.

+ Gutstop was at the Lazy Hours Pool Hall playing bottle-pool.

+ Rush is bursting with knowledge again about the various idioms his parents are dishing out.  However, they could care less.  Rush seems to know his idiom sources quite well.

+ Instead of borrowing funds from Vic to buy new clothes, this time Hank just wants to borrow Vic's nice clothes (but not his socks).

+ Cuddy Jackson was mentioned. A member of the Sacred Stars of the Milky Way lodge. He stands four feet, eleven inches tall, is bald and has no teeth.

+ This episode aired two days after the attack on Pearl Harbor.  You wonder what kind of mood the listener may have been in and if this episode made them happy or if they even cared?